The Highlanders have hammered South Africa's Sharks 48-15 in their Super Rugby match in Dunedin, and the seven-try win keeps the hosts well in the hunt for a playoff spot.

The Highlanders scored three tries before half-time, when they led 24-10, and they added four more after the break. 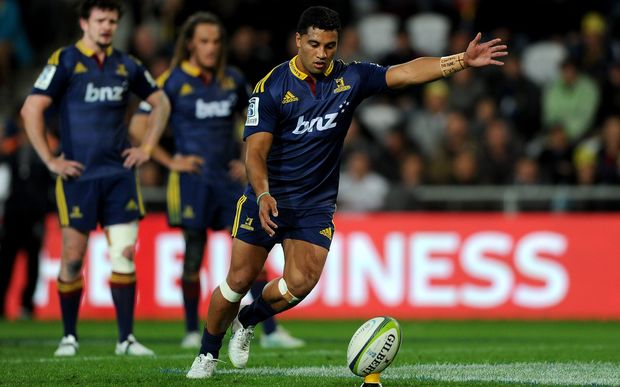 Lima Sopoaga is in great form for the Highlanders. Photo: PHOTOSPORT

An early try to blindside flanker Gareth Evans was converted by first five Lima Sopoaga, who then kicked a penalty.

But the Sharks' number 10 Fred Zeilinga kicked one penalty before Springboks prop Tendai Mtawarira crossed for a close-range try, also converted by Zeilinga, to tie up the score at 10-10.

Nearing half-time, All Blacks halfback Aaron Smith took a quick penalty tap kick and made a good break, converted in the corner by Fijian winger Waisake Naholo, after a kick-pass from Sopoaga - who then slotted the conversion for good measure.

Patrick Osbourne added the Highlanders' third try just before half-time in the left-hand corner, with Sopoaga again providing the assist, this time with a clinical pass to his winger before Sopoaga also kicked the conversion from the sideline.

Up 24-10 at the break, All Black Ben Smith had to leave the field for a concussion test. The fullback was replaced by Marty Banks.

Shortly after that, in the 54th minute, Highlanders lock Mark Reddish scored the bonus point try with a sneaky hand onto a dropped ball over the Sharks' line.

Replacement front-rower Brendon Edmonds added an outstanding team try under the posts for the Highlanders' sixth five-pointer, as the Sharks began to tire. Inevitably Sopoaga converted and the lead was out to 33 points.

The Sharks got back on the scoreboard in the 70th minute as they got their rolling maul going for an unconverted pushover try, but replacement forward Elliot Dixon then added the Highlanders' seventh try with a couple of minutes remaining to complete the rout - once Banks narrowly missed the conversion.