The NFL hopeful and former Australia league international Jarryd Hayne says he is enjoying his time training with the San Francisco 49ers but still has a long road ahead.

Hayne is hoping to make the 49ers' 53-man roster which will be announced at the end of August, but he declined to what he thought his chances were.

Hayne says his days start at 6am and he often doesn't get to bed until midnight as he studies play books. 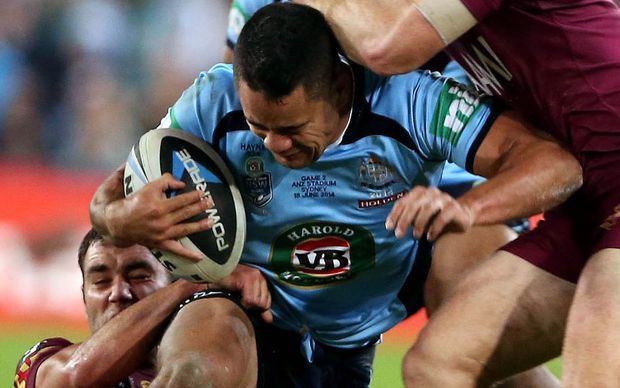 Jarryd Hayne is in his rugby league days. Photo: Photosport

There was speculation about what position Hayne would play, but he says he's been training with the running back and special teams squads.

As well as memorising thick play books Hayne the past month has been struggling with the every day problems a new Aussie in the US faces.

There's the issue of finding a decent cup of coffee and he's thinking of importing an espresso machine from Australia.

Hayne put out an SOS on Twitter a few weeks ago about tips on leasing a car in San Francisco, but he is still existing with his rental.

And, of course, there's the Aussie accent.

He has discovered Americans have trouble understanding him, particularly when he uses phrases like "heaps better".

"I have to speak really slow...I have a tendency to speak pretty fast."