Eliud Kipchoge led a Kenyan clean sweep of the podium places as he won the men's London Marathon in a time of two hours, four minutes and 42 seconds. 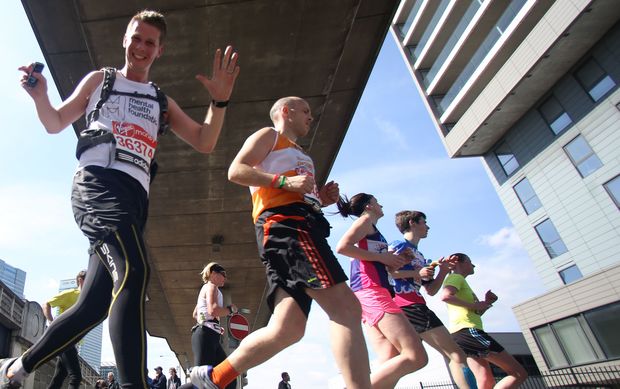 "It was a tough race. My training paid off and it went to plan," said Kipchoge.

The 30-year-old who went up in distance after his world title success on the track in Paris in 2003, beat a field featuring the three-fastest marathon runners of all-time.

His winning time was well outside Kipsang's London record of 2hrs 04 mins and 29 secs set last year but as he waved to the crowd in sight of the finish, it was clear that he was delighted by victory alone.

Kimetto came in third this year in a time of 2:05:50, with Biwott in fourth place.

In the women's race, there was a shock win for Tigist Tufa as the Ethiopian ended four years of Kenyan domination in London.

Tufa was only the ninth-fastest competitor in the elite women's field but pulled clear just over a mile from the finish.

Keitany, the winner of the race in 2011 and 2012, just did enough to hold off Tufa's compatriot, Tirfi Tsegaye, in the battle for second place.

Tufa, the 2014 Shanghai Marathon champion, was the first Ethiopian to win the London women's race since Derartu Tulu in 2001, with a 25th mile completed in just 5mins 07 secs enabling her to make a decisive breakaway in overcast and cool conditions.

"I've always dreamed about winning the London Marathon and I can't say how happy I am that this has come true," said Tufa who beat a field featuring the Kenyan quartet of defending champion."

No longer among the elite competitors, but running among the main field, the 41-year-old was bowing out on the same course where in 2003 she set a women's world record of 2:15:25 that still stands.

However, Radcliffe's career has been blighted by a series of injuries in recent years, with illness and fitness problems helping deny her an Olympic title.

"Down the last mile I thought, 'I don't care about the time'. I just wanted to thank as many people as I could," Radcliffe told the BBC after embracing husband Gary Lough and their two children, daughter Isla and son Raphael, at the finish.