The England cricketers are 78 without loss in reply to the West Indies first innings of 299 after two days of the second test in Grenada. 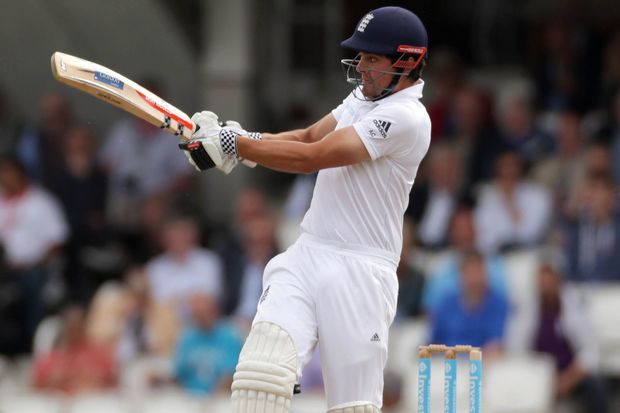 Skipper Alistair Cook and fellow opener Jonathon Trott, returning after a lengthy absence from the team, failed to get scores in the drawn first test in Antigua but will take much confidence from the final session.

Cook, who has not scored a test century for nearly two years, finished on 37 not out with Trott on 32.

The West Indies attack lacked penetration in the absence of injured Jerome Taylor and with batting conditions improving, as the damp and overcast weather made way for bright sunshine, Cook and Trott made good progress before stumps.

There was turn for leg-spinner Devendra Bishoo on a pitch that should offer more on the final two days but the West Indies will be disappointed they did not put the England openers under more pressure with the new ball.

England bowled West Indies out for 299 after Marlon Samuels made his seventh test century and a last-wicket partnership of 52 pushed the hosts to a competitive total.

Rain showers disrupted the first session but after an early lunch, Samuels, 94 not out overnight, completed his ton.

The Jamaican made 103 from 228 balls in an uncharacteristic but valuable patient knock before he was caught by Ian Bell at second slip off James Anderson.

The disappointment at losing Samuels just after reaching his century was intensified when skipper Denesh Ramdin went shortly afterwards, England wicketkeeper Jos Buttler snapping up an edge off Stuart Broad.

Jason Holder, who had looked in good form again after his century in the last test, fell just after hitting Broad for a six when his attempted drive was edged to Buttler.

Broad, who finished with figures of four for 61, made good use of the second new ball and also claimed the wicket of Kemar Roach who was comfortably caught by Joe Root after an edge on to his pad lobbed up to gully.

The West Indies were 247 for nine but last pair Devendra Bishoo and Shannon Gabriel played positive strokes as the hosts again displayed their new-found resilience under coach Phil Simmons.

Bishoo's 30, before he was trapped lbw by Moeen Ali, was his highest test score and Gabriel's unbeaten 20 was also his best in five-day cricket.