The Queensland and Kangaroos halfback Johnathan Thurston put injury-hit South Sydney to the sword to pilot North Queensland to a rare hat-trick of National Rugby League wins on the road. 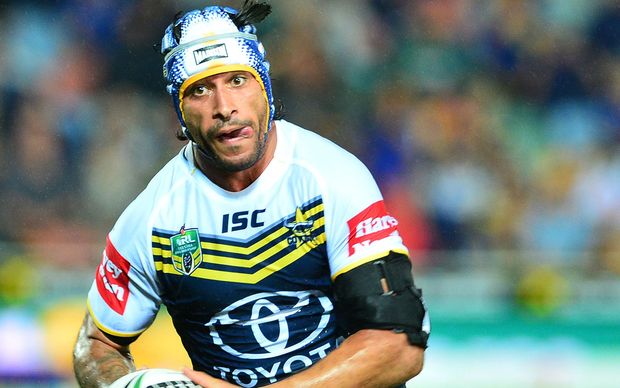 Thurston bagged a try-scoring double, had a hand or boot in two others and slotted four conversions as the Cowboys crushed the premiers 30-12 in Sydney last night.

The champion halfback's five-star, 16-point performance lifted North Queensland into a six-way share of sixth spot, out of the top eight only on differential, after the Cowboys opened their 2015 campaign with three straight defeats.

Thurston also outpointed South Sydney skipper Greg Inglis as debate swirls around which of the two Queensland State of Origin superstars are most deserving of immortal status.

While Thurston and Inglis didn't go head to head in the halves after Souths coach Michael Maguire pulled a minor surprise pre-game and thrust ball-playing back-rower Glenn Stewart into the five-eighth role, the two giants of the game were in everything for their respective sides.

The premiers struck first blood in just the second minute when Dave Tyrrell crashed through Jason Taumalolo for a soft try next to the posts.

But it didn't take long for Thurston to get the Cowboys back in it.

After setting up the Cowboys' last six tries in wins over Melbourne and Penrith, the champion No.7 laid on his side's first of the night in the eighth minute with a pinpoint crossfield kick for leaping winger Justin O'Neill.

Thurston missed the conversion and his errant pass 12 minutes later landed in the arms of Luke, who raced 40 metres clear to put Souths deep on the attack.

Inglis sized up the situation superbly to put winger Alex Johnston over from the very next play and Luke's conversion made it 12-4.

Inglis looked to have put the Rabbitohs further ahead when he swivelled through four attempted tacklers only for the video referees to rule he knocked on while trying to ground the ball for a try.

Steve Folkes and Steve Clark also denied Cowboys five-eighth Michael Morgan a try on the stroke of halftime for an obstruction in the lead-up.

Down by eight points at halftime, Thurston needed just eight minutes after the break to tie the game up, scoring 34 seconds after the interval and then slotting a penalty goal to make it 12-12.

Thurston's quick hands helped winger Antonio Winterstein to squeeze over in the corner as North Queensland hit the front for the first time after 55 minutes.

Thurston fittingly clinched victory when Morgan put him over seven minutes from time before hooker Jake Granville's 70-metre dash from dummy half earned the Cowboys their fifth try.