Two tries from Manu Vatuvei in his 200th game for the club helped the Warriors to a 32-22 win over Wests Tigers at Mount Smart Stadium and into the National Rugby League's top 10. 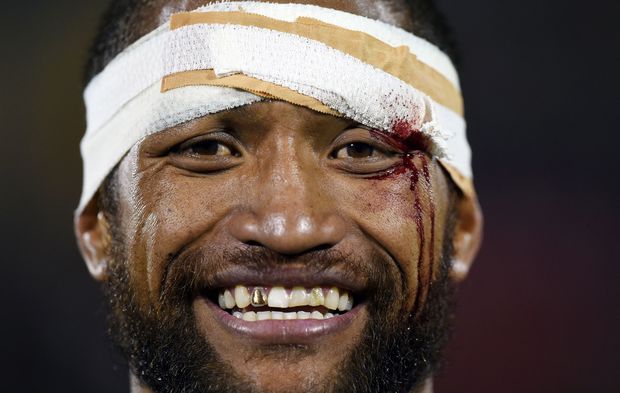 The Warriors' wing Manu Vatuvei after the match. Photo: PHOTOSPORT

Tries in the 16th and 70th minute from 'The Beast' did much of the damage as the New Zealand side improved their record to 3-3 for 2015.

The Tigers made the stronger start, leading 6-0 inside 10 minutes thanks to a Tim Simona try and Pat Richards' conversion.

But the Warriors' ran in four straight tries to establish a healthy lead on the half-hour mark.

First Vatuvei gave the 13,781 strong crowd just what they wanted with a characteristic storming touch down in the corner, before Chad Townsend and Tuimoala Lolohea went over in quick succession.

When Johnson finished off a neat wrap-around play to score his first try of the year on the half hour the Warriors looked to be doing the job with ease.

But with some much-needed possession the Tigers managed to hit back through fullback James Tedesco, who blitzed Townsend with pure speed to double the visitors' tally.

The New Zealanders took a 20-12 lead to the break.

He may have been marking up on arguably the Telstra Premiership's most powerful centre in Konrad Hurrell, but Simona showed he wasn't going to be outdone when he shoved away would-be tackles from Hurrell and Lolohea to go over for his second.

Try as they may the Warriors couldn't find a way through the stout Tigers' defence, as the visitors repelled consecutive sets backed up against their own line.

In the end it took another special effort from the milestone man Vatuvei, followed by a Johnson conversion, to get the Kiwi side home safe.

Former Tigers back-rower Bodene Thompson capped things off for the hosts two minutes from time to stretch the lead to 32-22.

The win lifts the Warriors to ninth though they're level on points with the fourth placed Roosters.