Rain's washed out the New Zealand cricketers' warmup match against Zimbabwe at Lincoln.

It wasn't just the weather that was dismal - six wickets fell for only 57 runs with just opening batsman Martin Guptill impressing with exactly 100, and off just 86 balls. 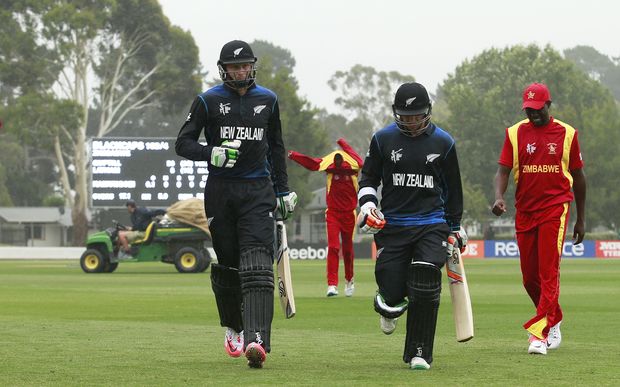 Players leave the field for rain at Lincoln Photo: Photosport

Rain forced a final halt to play at about 2pm, with the hosts 157 for seven in the 31st over.

Brendon McCullum, Kane Williamson, Corey Anderson, Tom Latham and Daniel Vettori all failed to reach double figures with the bat, while Ross Taylor was out for 11.

Guptill made a century before he departed caught for 100 off the bowling of Sikandar Raza.

Captain and opener McCullum was the first wicket to fall, gone for eight after being caught and bowled by Tinashe Panyangara. 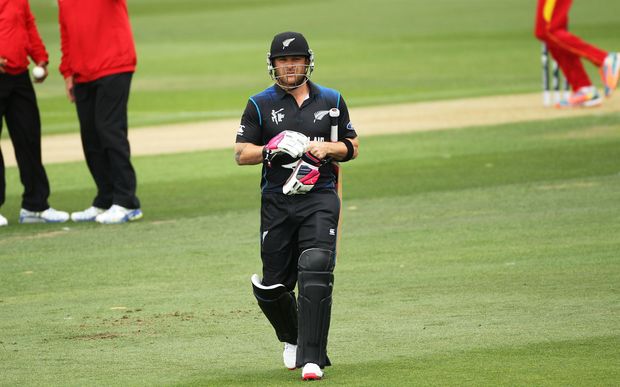 Brendon McCullum walks off after being dismissed at Lincoln Photo: Photosport

Williamson was out next for six, also off the bowling of Panyangara.

Then Taylor was caught for 11 from Elton Chigumbra, who also dismissed Corey Anderson for six.

Latham fell for nine to a catch off Tafadzwa Kamungozi, while Daniel Vettori only made six before he was caught off Hamilton Masakadza.

New Zealand won the toss and chose to bat.

Coach Mike Hesson picked all-rounder Anderson ahead of Grant Elliott, and both of his spinners Nathan McCullum and Daniel Vettori.

The Black Caps play South Africa on Wednesday in their final warmup game at Christchurch's Hagley Oval, then they kick off their World Cup campaign against Sri Lanka on Saturday at the same ground.