The Blues Super Rugby franchise has confirmed that the organisation will move to a purpose-built, training and administrative headquarters at Alexandra Park in Auckland later this year. 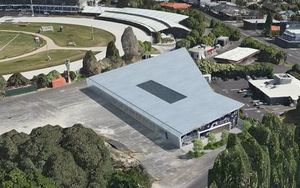 The organisation has committed to a 15-year lease with Auckland Trotting Club to base their High Performance Centre at the Campbell Crescent venue.

The agreement will see the construction of a world-class high performance facility that will include a gym, facilities, offices and training field.

Blues chairman Tony Carter says they aspire to be a world class organisation both on and off the playing field - and they need appropriate facilities for the team and all of their staff. This is a once in a generation opportunity to reposition the entire Blues organisation towards achieving their long term goals.

Covering an approximate area of 1800sqm, the facility will boast a high-tech gymnasium, prehab/rehab area, rooms for seminars, medical and physiotherapy treatment, sports science and changing rooms, a cafe, and offices for coaching, team management and administration.

The training field is located inside the trotting track with an option for a second field if needed.

The Blues also plan to use the facility for age group development camps and will make it available to the three provincial unions within the Blues region - Northland, North Harbour and Auckland - for training camps and also plan other usage in the sport and the community.

Auckland Trotting Club and the Blues confirmed that the building of the Greenlane-based training facility would not cause any scheduling conflicts between the two organisations, with the Blues planning to move to their new base by the end of the year.

The Blues have been based at Unitec in Mt Albert for approximately 10 years. The organisation's administrative offices were based at Eden Park until last year when after a change in ownership, and the new Blues stand-alone organisation also moved to their Carrington Rd base.

The move will see rugby return to the venue for the first time in more than a century. Formerly known as Potter's Paddock, Alexandra Park hosted the 14th All Blacks test in 1908 in which the home team comprehensively beat the British and Irish Lions 29-0 in front of 12,000 people.