The Asian Cup football tournament's seen one of the biggest shocks in its history.

Reigning champions Japan have been sent crashing out 5-4 in a penalty shootout, by the United Arab Emirates, after the scores were locked at 1-1 after extra time in their quarter-final in Sydney. 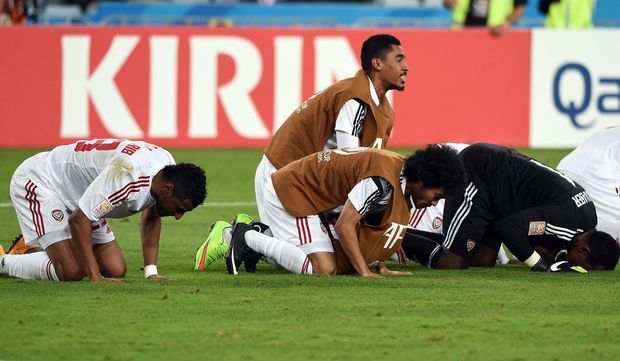 Missed penalties by superstar pairing Shinji Kagawa and Keisuke Honda left it down to Ismail Ahmed to book the UAE a semi-final clash with the Socceroos in Newcastle on Tuesday, and the big defender made no mistake with a brilliant effort.

In Friday night's other quarter-final, Iraq defeated Iran 7-6, also on penalties, after the teams drew 3-3 through extra time in controversial circumstances in Canberra.

The result might have been different had Iranian defender Mehrdad Pooladi stayed on the pitch.

He was sent off after just 43 minutes when he was booked for a second time. Iran were leading 1-0 when he was shown a second yellow card, and spent the rest of the match defending.

Pooladi was first booked for a rash tackle on Ahmed Yasin then for either diving or time wasting when he fell to the ground after he was lightly pushed in the chest by Iraqi goalkeeper Jalal Hassan.

The referee Ben Williams initially appeared to forget that he had already shown Pooladi a yellow card and told him to play on, and it was only after the Iraqi players protested that he reached into his pocket and pulled out the red.

The victory sends Iraq on its way to Sydney where they'll face another cup favourite, South Korea, in the semis on Monday.