Captain Steve Smith took a catch to snare India's first wicket after scoring a big century to fire Australia to a mammoth first innings total of 530 on day two of the third cricket test in Melbourne. 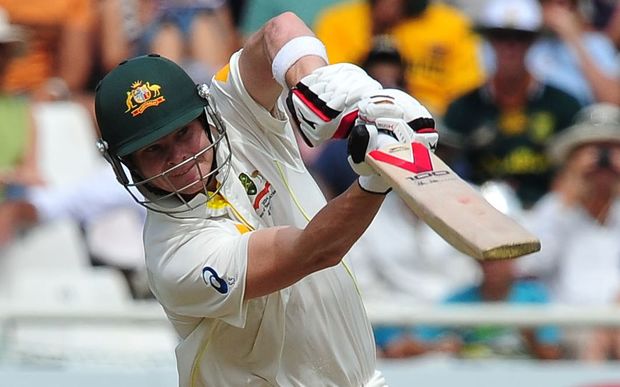 Standing in for the injured Michael Clarke, Smith scored a career-high 192 to anchor a tail-end assault on India's bowlers, who leaked 314 runs for the final five wickets at the MCG.

"Our tail have come out and taken the bowlers on," Smith told reporters after pacemen Mitchell Johnson (28) and Ryan Harris (74) piled on the runs.

"I don't think they (India) had an answer for the way they were playing. It's great for us that the tail can come out and do that and be really aggressive."

Returning to the field after tea, Smith ended a 55-run opening partnership by diving low at second slip to catch an edge from Shikhar Dhawan (28) off the bowling of Ryan Harris.

Opener Murali Vijay (55 not out) and number three batsman Cheteshwar Pujara (25 not out) pushed India to 108-1 at stumps, still 422 runs adrift of the hosts' total.

The tourists were lucky not to be two wickets down, however, with wicketkeeper Brad Haddin spilling an edge from Pujara when the batsman was on 12.

Vijay's unbeaten half-century, his fourth knock over 50 in the series, will give India some hope of reeling in the total on the benign drop-in wicket.

"They got a (few) too many runs for our liking," said spinner Ravichandran Ashwin, who finished with three wickets but conceded 134 runs.

"But if you look at the overall game, the score is pretty par for this wicket... It seems slow and pretty flat as well."

Smith's third century from three tests, however, has all but sealed the four-match series for Australia, who lead 2-0.

The 25-year-old smashed 15 boundaries and two sixes to all corners of the sun-bathed ground, before falling short of a maiden double-century when attempting an audacious ramp shot off paceman Umesh Yadav.

Smith's wicket brought the innings to a close and he walked off at tea to a standing ovation from the crowd of over 51,000.