The Wellington Phoenix coach Ernie Merrick was so confident in Nathan Burns' goal-scoring ability, he pulled his star striker from the field late in the side's 2-0 A-League win over Sydney FC to preserve his bank balance.

Before Sunday night's game, Merrick offered to personally pay $100 to any of his troops who slotted a hat-trick at Allianz Stadium. 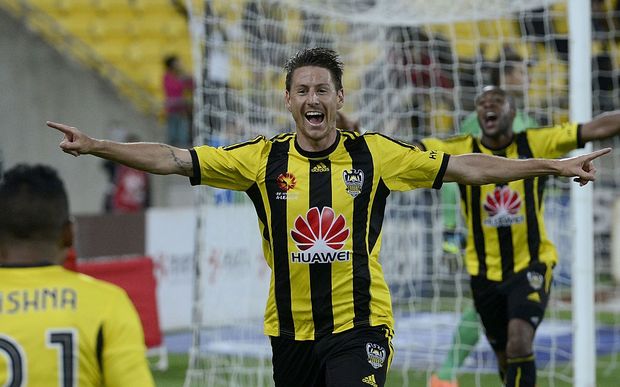 So when Burns scored a late double to secure his side three competition points, he substituted the 26-year-old.

Burns did nothing but enhance his chances of having his name read out when Ange Postecoglou trims his Socceroos squad for the upcoming Asian Cup.

He has been named in Australia's extended 46-man squad but is firming for a spot in the tournament after finding the back of the net 10 times to lead the league's goal-scoring chart this season.

"I tried to sign (Burns) a couple of times when I was at Victory ... I finally got him and I think I convinced him I would turn him into a goal-scorer," Merrick says.

"I said 'look I've got a bit of a record and I hope to improve on that'.

"Today I said to them that any player that scores three goals, I've going to give you a $100 out of my own pocket. So after he scored two I took him off.

"So as he's coming off he says 'So you're saving your hundred bucks'. I said 'Yep.'"

Burns has been capped seven times for Australia but hasn't appeared in national colours since November 2011.

He has resurrected his career after languishing for a number of years in the Greek and South Korean leagues. He was loaned to Newcastle last season before being signed to a two-year deal by Merrick.

After Sydney enjoyed control for most of the game, the Phoenix took the reins in the second half as the home team wilted.

Burns provided the highlight of the game when he produced a wonderful individual effort to beat two Sydney defenders to put his side 1-0 up in the 73rd minute.

The Wellington striker grabbed a second eight minutes later when he punished Sydney FC for a bad turnover to seal the Phoenix's sixth win of the season.