FA Cup holders Arsenal have been drawn against runners-up Hull City, a repeat of last year's enthralling final, in this season's third round after the draw was made. 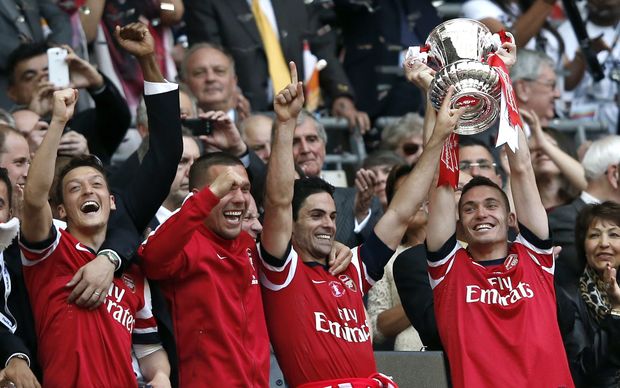 Arsenal won the final 3-2 but only after coming back from trailing 2-0 after eight minutes at Wembley.

Santi Cazorla and Laurent Koscielny scored to send the game into extra time before Welsh midfielder Aaron Ramsey fired in to end Arsenal's nine-year wait for a major trophy.

"I guess it was just meant to be, with it happening in rehearsal and the draw being in Hull," Curtis Davies, who scored for Hull in the final, told the BBC.

"Alan Shearer (who performed the draw) will have to take the plaudits for this. We will have to go there and just give them a good game."

Hull manager Steve Bruce said: "It's quite remarkable. As soon as I walked in everyone was telling me we had drawn Arsenal in the rehearsal, so to do it again in the main draw is a shock. Let's hope it is as good as the final was."

Liverpool will play League Two (fourth tier) AFC Wimbledon. The Merseyside Club lost the 1988 final to the original Wimbledon side before they relocated to become the Milton Keynes Dons in 2004.

Seventh tier Blyth Spartans, the lowest-ranked team in the draw for the third round, host Championship side Birmingham City.

Ties for the third round will be played January 3rd and 4th.