Australia plan on batting first in the opening clash of their four-Test series against India - if Mitchell Johnson has anything to do with it. 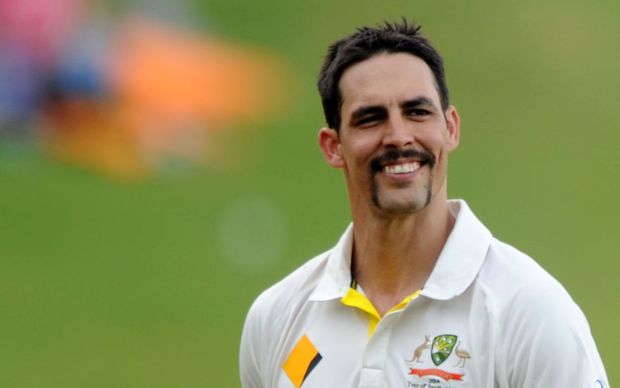 Grief-stricken captain Michael Clarke was excused from his pre-match press responsibilities, with Johnson taking his place on Monday.

The left-armer suggested Australia wanted to make first use of the Adelaide Oval drop-in pitch.

"If we win the toss I think we're going to bat. It's a really good wicket," Johnson said.

Clarke passed a fitness test on the weekend and will lead Australia in a highly-emotional Test at Phillip Hughes' adopted homeground.

The Australian players will wear Hughes' Test cap No.408 on their shirts for the match, while the number will also be painted on the oval.

"It's really special ... I'm very proud to be able to wear that number through this Test," Johnson said.

Both sides will observe a pre-match video tribute to Hughes narrated by doyen Richie Benaud.

Spectators will then be asked to stand for 63 seconds of applause.

Hughes was 63 not out when he was struck by a bouncer at the SCG in a Sheffield Shield match.

India's stand-in skipper Virat Kohli attended Hughes' funeral last week, describing the past fortnight as a "sad phase for everyone involved in the game".

"Phil was one of the guys I used to interact with when he used to come on tours and even when I was in Australia," Kohli said.

"I was in a camp with him in 2008 at Brisbane and I was always closer to him than most of the guys.

"It was an equally saddening and emotional moment for me."

Day one starts at 1pm NZT.