Pat Lambie has retained his place at first five eighths for South Africa's final northern hemisphere rugby Test against Wales in Cardiff on Sunday, as coach Heyneke Meyer made eight changes to his match-day squad. 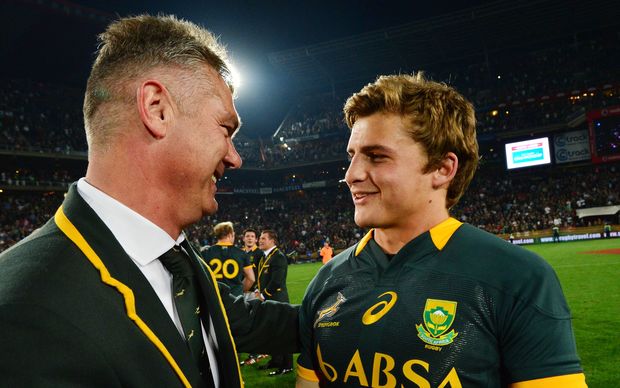 Coach Heyneke Meyer with Pat Lambie after the win over the All Blacks at Ellis Park in October Photo: PHOTOSPORT

With Morne Steyn and Johan Goosen returning to their French clubs as the game falls outside the international window, Meyer kept faith with Lambie ahead of the rookie Handre Pollard, who was first choice in the latter stages of the Rugby Championship.

Bryan Habana, who started in last weekend's 22-6 victory over Italy in Padova, along with Goosen and JP Pietersen, also heads back to Toulon.

Prop Tendai Mtawarira, hooker Bismarck du Plessis, fullback Willie le Roux, and wings Cornal Hendricks and Lwazi Mvovo are back in the starting line-up. The two switches to the front row are rotational.

Adriaan Strauss, who started at hooker in the victories over England and Italy, moves to the bench, where he will be joined by prop Trevor Nyakane and utility back Damian de Allende in the final changes.

Injuries and the non-availability of overseas-based players for matches outside the test window have meant that only three players - Le Roux, Du Plessis and No.8 Duane Vermeulen - will have played in all 12 Tests for the Springboks in 2014.