The Briton, chasing his second title, was quickest in the afternoon and after-dark floodlit sessions at the Yas Marina circuit that hosts the decisive 'duel in the desert'. 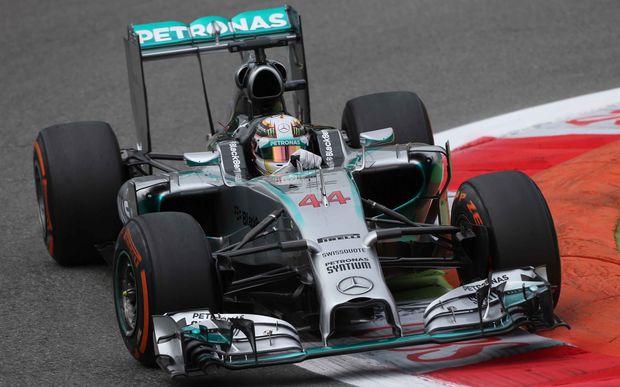 The bragging rights were limited, however, by the slender margin between the two with Hamilton 0.133 faster in the first session and a mere 0.083 in the cooler evening conditions.

He produced his best lap of one minute 42.113 after nightfall.

Hamilton says he just has to drive the way he usually does and what will be will be.

He says he feels good in the car... undoubtedly, there is more time to find so he's got to go and chip away at it tonight.

The other drivers waged a familiar battle to be best of the also-rans, but with an even greater gap than usual.

Spaniard Fernando Alonso, preparing for his last race with Ferrari, was third quickest in the opening session but a massive 1.7 seconds off Hamilton's pace.

Hamilton leads Rosberg by 17 points but, with double on offer for the first time, the spectre of mechanical failure hangs over the race.

The 2008 champion need only finish second, however, to be champion even if Rosberg wins.

Mercedes are also on course for a record 16 wins in a season, having already notched up an unprecedented 11 one-twos.

Quadruple world champion Sebastian Vettel, last year's race winner, was fourth fastest in both sessions as he geared up for a farewell to Red Bull before replacing Alonso at Ferrari.

Britain's Jenson Button, maybe facing his last race in Formula One, improved to eighth for McLaren after a troubled first session.

Mercedes-powered Williams, who stopped their cars in the first session after they shed bodywork on track, had a normal second stint with Finland's Valtteri Botttas fifth.

The first session also saw some less familiar names in action, with Britain's Will Stevens slowest as he prepared for a race debut with administrator-run Caterham.