Caroline Wozniacki has put a huge dent in Maria Sharapova's bid to finish the season as world tennis number one, by overcoming some distracting bright lights to down the Russian in three sets in their marathon opening group match of the WTA Finals in Singapore. 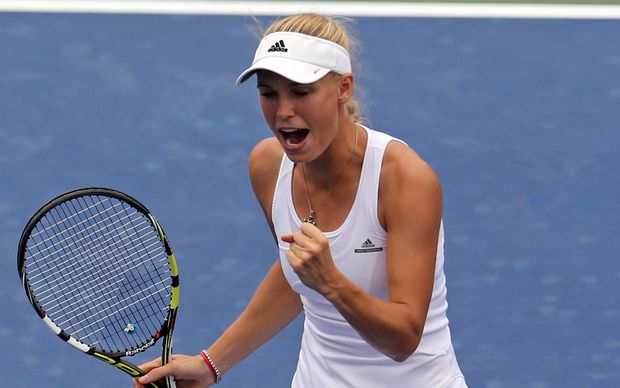 The Dane grabbed the final qualifying spot in the eight-woman field but it was world number two Sharapova who looked the lower-ranked player as some stunning winners were lost in a wave of 76 unforced errors.

The French Open champion also tossed in 15 double faults as she was broken seven times in an erratic display, with Wozniacki growing in confidence throughout the three hour 13 minute match as she sensed her opponent's struggles to find a fix.

A flashing bulb stopped one point, with the Dane then unhappy about the brightness of some of the stadium's lights and demanding the chair umpire switch off the offending lamps.

Sharapova can still finish the year as number one but must make it through to the final to stand any hope of overhauling Serena Williams, who began her Red Group campaign with a straight sets win over Ana Ivanovic.

Meanwhile Serena Williams shook off the rust and a feisty challenge from Serbia's Ana Ivanovic to open the defence of her WTA Finals tennis title with a 6-4 6-4 victory in the opening match of the elite eight-player tournament.

In the second match, Romania's Simona Halep joined Williams at the top of the Red Group standings after the world number four beat Canada's Eugenie Bouchard 6-2 6-3.

Illness and a knee problem forced the American world number one to withdraw from her last two tournaments since winning a third straight US Open title last month and Williams struggled early in an arena hosting the event for a first time.

Ivanovic is making her first appearance in the season-ending event since 2008 when it was held in Qatar.

Williams says she's really excited with how she played, she's been working hard all her life for nights like this and she loves it.

The victory was Williams' 16th in a row at the tournament as the 33-year-old American remains on course for a hat-trick of titles.

Two of the WTA's most-improved players of the last year faced off in the second match but an expected tight encounter failed to materialise as Halep blew away an erratic Bouchard to open her account in her first appearance at the event.