Auckland have all but booked their place in provincial rugby's Premiership semi-finals after claiming a record 60-19 victory over Waikato at a soggy Eden Park. 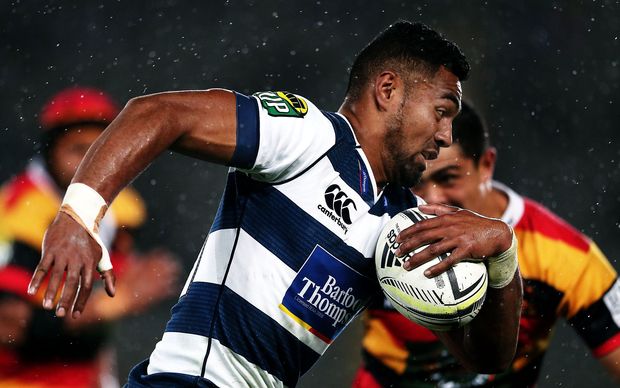 The hosts ran in nine tries to climb within five points of third-placed Canterbury in the Premiership standings and increase their lead over fifth-placed Waikato to nine points.

The was Auckland's biggest score against Waikato in 92 years of competition, beating the previous record of 50 set back in 1984.

Only some last-gasp finishing by Waikato's Loni Uhila, Anton Lienert-Brown and Hame Faiva prevented a new record for the biggest winning margin.

George Moala shone brightest amongst a Blues backline of standout performers, the left wing bagging a brace of tries in the big win.

Sitting in fifth spot with just one regular season game remaining, there aren't enough points on offer for Waikato to reel in any of the top four teams.

Their season which started with a thrilling upset against Wellington is now over, with their final match against Bay of Plenty a dead rubber.

Meanwhile, Auckland coach Paul Feeny has just four days to prepare his side for a crucial encounter against a Counties Manukau side boasting dual international Sonny Bill Williams.

The Lions are yet to win a single game this year, falling to their 8th straight loss at McLean Park.

They remain dead last in the Premiership.

The Magpies hold on to the Shield for at least another week, while the win lifts them to the top of the Championship standings, one point ahead of Manawatu.

Wellington paid a heavy price for the sin-binning of Vaea Fifita late in the first half, with the Magpies piling on three tries in his absence to open up a commanding lead.

Winger Ryan Tongia continued to show his class and finishing abilities by picking up two of the hosts five tries.

His tally is now 10 for the season, making him the top tryscorer in both the Premiership and Championship divisions.

The Magpies may be without loose forward Gareth Evans for the remainder of the season after he suffered a suspected broken collarbone in the match.

Hawkes Bay next have a top of the Championship table battle with Manawatu in Palmerston North on Sunday, while the Lions will once again pick themselves up for the a clash with Taranaki in the Capital also on Sunday.