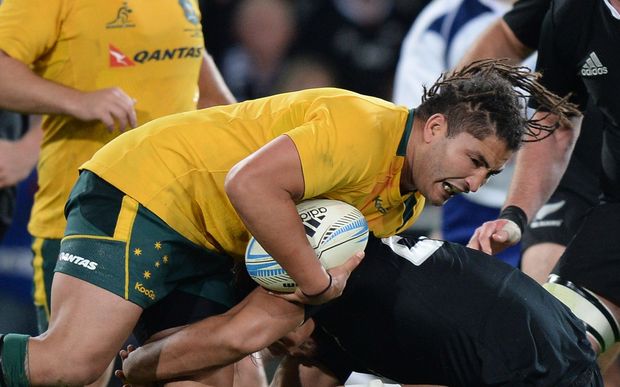 Australia's dreadlocked rake, Fainga'a becomes the fifth man to wear the jinxed No.2 jersey in eight games after gaining a shock recall ahead of Queensland teammate James Hanson.

The 27-year-old is one of three changes to the starting team which overcame Argentina 32-25 on the Gold Coast, with vice-captain Adam Ashley-Cooper returning from injury and Joe Tomane edging out Rob Horne on the other flank.

Hanson had appeared an automatic choice after the hooker's curse claimed Tatafu Polota-Nau (ankle) for the second time this year but Fainga'a's reliability in the scrums and lineouts was preferred against a Boks pack that unsettled the All Blacks in Wellington.

But the fact Bismarck du Plessis, seen as the best No.2 in the world, is on the South African bench, contrasts the rivals' fortunes.

Fainga'a has lived a bench-warming existence since making his international debut in 2010, starting seven of his first 11 Tests, before sitting behind Stephen Moore and Polota-Nau for 18 straight.

And that doesn't include several more when left a frustrated unused reserve by Robbie Deans.

But Ewen McKenzie views Fainga'a's flexibility as a fast-striking scrummager under pressure as a key to Australia winning clean ball off their feed.

Not since 2006, when John Connolly experimented leading into the 2007 World Cup, has Australia resorted to five different starting hookers in a calendar year.

McKenzie has also recalled veteran prop Benn Robinson, left out of the squad for the first seven Tests of 2014, on the bench ahead of Pek Cowan due to his experience and loose-head nous.

Will Genia was overlooked for a bench spot with Nic White kept among three backs in a 5-3 split.

A match-winner in Perth, Horne has lost out with faster wing specialist Tomane now recovered from a hamstring injury.