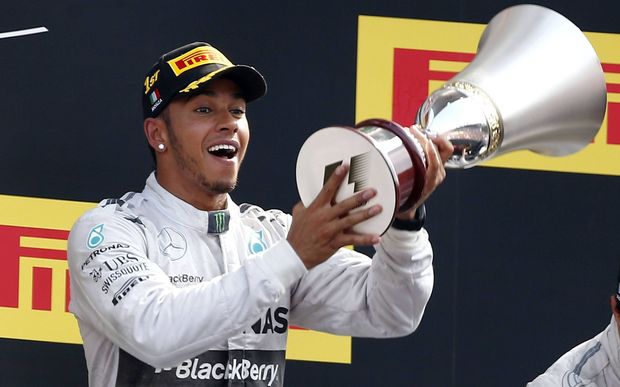 The Briton crossed the line just 0.007 seconds ahead of the German.

Hamilton, who trails championship leader Rosberg by 22 points with six races remaining, lapped the 23-turn Marina Bay Street Circuit in one minute 45.681 seconds after his team mate had crossed the line in 1:45.688.

Although the dominant Mercedes duo faced a stiffer challenge from Red Bull and Ferrari in practice and the first two qualifying sessions, the front-row lockout is the seventh of the season at a track where overtaking is notoriously difficult.

Daniel Ricciardo was third fastest in 1:45.854 as Red Bull took both spots on the second row with the Australian's team mate and three-times Singapore winner Sebastian Vettel clocking 1:45.902 to claim fourth on the grid.

Ferrari's Fernando Alonso was fifth fastest, just ahead of Felipe Massa, whose Williams lacked speed the entire weekend before the Brazilian suddenly found some lightning pace in the final qualifying session.

The pole was Hamilton's sixth of the season and 37th overall but when he made a big mistake on the apex of Turn One on his final qualifying lap, first place looked a long shot with the top six cars separated by just three tenths of a second.

The Briton knuckled down and made up for the error, pushing to the limit under the floodlights as he continues to take the title fight to his team mate in their season-long battle for supremacy.

Ferrari's Kimi Raikkonen was seventh fastest, although a mechanical problem prevented the Finn from setting a second quick lap in final qualifying as Valtteri Bottas (Williams), Kevin Magnussen (McLaren) and Daniil Kvyat (Toro Rosso) completed the top 10 on the grid.

Rosberg was happy to secure another front-row grid position but was left ruing just how close he had been to claiming pole, the German lamenting that 7,000ths of a second is nothing.

Ricciardo has won three times this season but has yet to secure a pole position in his maiden campaign at Red Bull with the Australian encouraged by his performance around the 5.065-kilometre Singapore street circuit.