Penrith have turned the National Rugby League title race on its head with a last-gasp 19-18 qualifying win over the Sydney Roosters.

A low-trajectory Jamie Soward field goal with less than 10 seconds left on the clock earned the Panthers the one point win at Allianz Stadium after the minor premiers looked to have snatched the match just moments earlier.

A try with six minutes remaining to Roosters halfback Mitchell Pearce, and a controversial conversion to five-eighth James Maloney, who was off the field when the try was scored, had given the Roosters an 18-12 lead. 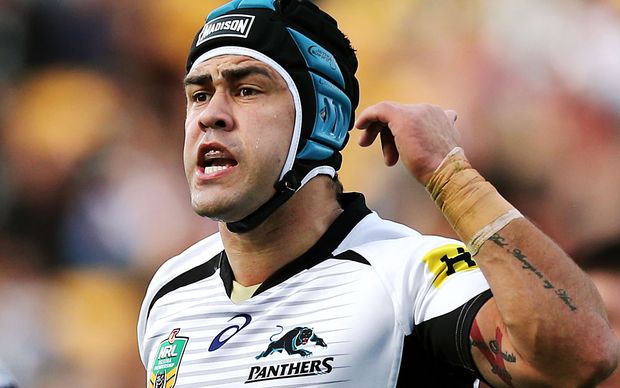 But an incredible reply from the Panthers with three minutes remaining, followed by an ice-cool sideline conversion from Soward - and then his late, late heroics sent Penrith's travelling fans into a frenzy.

After an injury-ravaged campaign, the win leaves the Panthers one win away from a fairytale grand final appearance, while the Roosters return to Allianz on Friday night for a sudden-death showdown with Johnathan Thurston's resurgent North Queensland, who had a 32-20 win over Brisbane.

If they survive that, the Roosters will play new title favourites South Sydney in a grand final qualifier in two weeks.

The win over the defending NRL champions means Penrith will will enjoy next weekend off and are now one win away from their first grand final berth since winning the title in 2003.

Meanwhile the Junior Warriors are into the semi finals of the under-20 competition after an eight try 44-30 win over the Sydney Roosters.

The eighth-placed Warriors built on a 28-14 halftime lead to stretch out to a 44-18 advantage midway through the second spell before the Roosters finished with two late tries.

They'll now play the minor premiers the Newcastle Knights, who were upset 30-22 by St George-Illawarra.