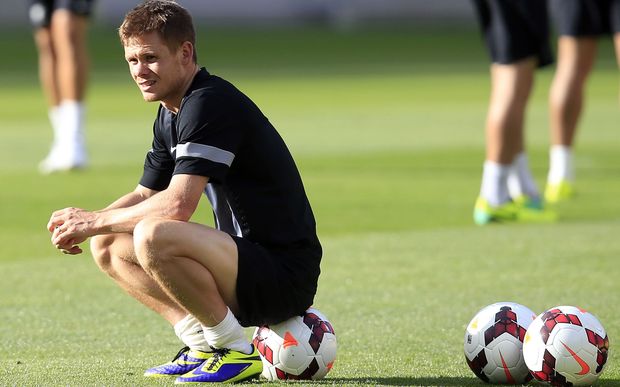 The Central Coast Mariners have released the All Whites midfielder from his contract, allowing him to play with A-League rivals the Wellington Phoenix.

The Mariners released a statement overnight Friday confirming the club and the New Zealand international had mutually agreed to part ways.

The 27-year-old midfielder, who was contracted to the Mariners until January 1st next year, had been at the centre of a protracted contract saga since informing the club of his decision to sign for the Phoenix.

In August, a Football Federation of Australia arbitrator ruled that he was still contracted to Central Coast however McGlinchey was in the process of appealing that decision.

That appeal will now be dropped.

Dome says as soon as the case went to the arbitrator and lawyers got involved it was always going to get complicated.

He says it was frustrating it dragged on into pre-season, halting McGlinchey, who's been training with the Phoenix for months, from playing with the Wellington side.

However he's more than happy the dispute is now resolved and they can move forward with a genuine New Zealand born A-League star.

One of the sticking points had been that A-League regulations forbid transfers being paid between clubs and the Mariners were not willing to give up one of their marquee players without compensation.

McGlinchey, who returned from a short-term loan with Sendai in J-League shortly after former Mariners coach Graham Arnold was dumped from the Japanese club, was led to believe he had some wiggle room in his contract by the Phoenix, who were in turn supported by the Professional Footballers Association.

The loophole came about when the club changed ownership and the players were then asked to sign new contracts, leading McGlinchey to believe he could sign elsewhere.

In a statement the Mariners said McGlinchey had agreed to compensate the club for his early termination.

"Central Coast Mariners thank Michael McGlinchey for his services to the club between 2009 and 2013, highlighted by a 2013 A-League championship triumph, a 2012 A-League premiership success ... and qualification for the 2013 AFC Champions League Round of 16."

"Central Coast Mariners are satisfied that the matter with Michael McGlinchey is now resolved, and are pleased that the club's full focus can now be on success on and off the pitch throughout A-League season 10."

McGlinchey lives in Wellington with his family and has been training with the Phoenix, but has yet to play a game for them.

McGlinchey will now take part in their three-match pre-season tour of Australia, which starts in Newcastle on Saturday night.