The Springboks will include seven non-white players in 23-man match squads next year if dramatic transformation proposals are adopted by the South African national rugby body. 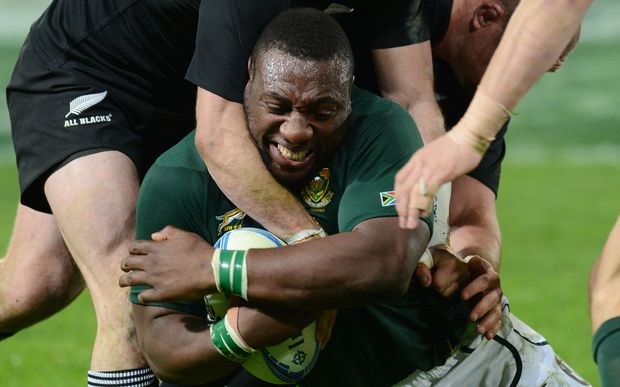 At least five of the seven should be on the field at any time during Tests leading up to the 2015 Rugby World Cup in England, a South African Rugby Union (SARU) statement said.

They were among four black forwards and three black backs included in a 30-man Springboks squad selected by coach Heyneke Meyer to tour Australia and New Zealand.

Facing intense government pressure to transform a historically white sport, SARU want half the national team to be non-white by the 2019 season.

The '50-50' plan would also apply to national sevens, youth and schoolboy teams and to the Currie Cup, the national inter-provincial rugby competition.

When Meyer names his 30-man World Cup squad for England, at least five of the non-whites are expected to be black Africans.

SARU said in a statement that ignoring the racial imbalance in national teams would "put the sport at peril."

"The plan has been shared with SASCOC (national Olympic body) and the sports ministry and the next step is for the general council to sign it off."

Nobel peace prize laureate and leading anti-apartheid campaigner Desmond Tutu recently criticised the lack of Springbok game time for black Africans, lamenting the "tortoise pace" at which racial integration had taken place in the national team since the collapse of apartheid 20 years ago.

"Particularly hurtful is the selection of black players as peripheral squad members - never given the chance to settle down and earn their spurs," Tutu said.

When the Springboks won the World Cup again in 2007 only two non-whites - wings JP Pietersen and Habana - started the final against England in Paris.

Cricket is the most racially integrated of the three major sports in South Africa with half the team non-white while the football side contains one white, England-based midfielder Dean Furman

South Africa started with 14 whites and a mixed-race left-wing, Chester Williams, when they won the 1995 World Cup final against New Zealand in Johannesburg.

Then president Nelson Mandela attended the match wearing a replica jersey of captain Francois Pienaar, and a movie was later shot detailing the encouragement the statesman gave the team throughout the tournament.

It was an amazing gesture by Mandela as many blacks detested the Springboks, seeing the team as an extension of the apartheid government they bitterly opposed.