The Australian basketball team have rejected suggestions their shock loss to Angola at the World Cup was a tank job to avoid a quarter-final showdown with the United States. 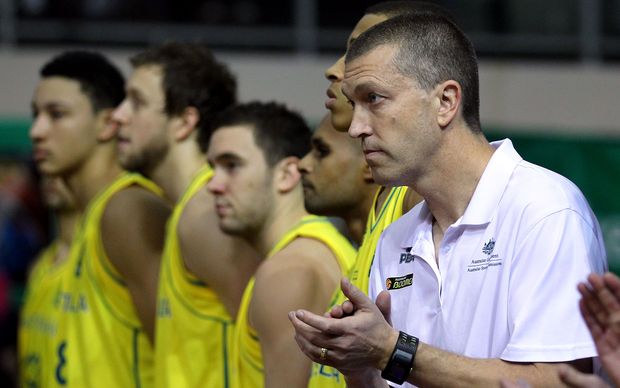 The Boomers, chasing a fourth straight victory for the first time in their World Cup history, were downed 91-83 by Africa's No.1-ranked team after fielding a second-string team and letting a 15-point lead midway through the third quarter slip.

With a trip to the round-of-16 game already secured, coach Andrej Lemanis made a pre-match decision to rest his two best performing players of the tournament, star centre Aron Baynes and the sharp-shooting Joe Ingles, while giving fellow starters Matthew Dellavedova and David Andersen less than four minutes each.

The loss conveniently puts Australia in a stronger position to challenge for a maiden medal at the tournament, the Boomers will now face Turkey in the first knockout round and are on the other side of the draw to the Americans, avoiding Team USA until the semi-finals.

But when challenged by reporters on whether his side had contested the match in the spirit of the game, Lemanis was defiant, arguing the heavy tournament schedule demanded he rest his players before the next stage of competition.

"We always, as Australians, compete the right way," he said.

When it was pointed out that some would view the loss, and Australia's role in it, with a modicum of doubt, Lemanis was nonplussed.

"People will make up their own minds," he said.

"There's always going to be speculators. I can't control what people think."

But when pressed on whether Australia had entered the game with a mindset that losing was acceptable, Lemanis responded: "Nobody likes losing. (The loss) doesn't guarantee us third spot."

"There's still games to be played that will determine the outcome of the pool."

"We have no control over that game. That was always the case coming in."

For much of the match it appeared Australia would cruise to a history-making fourth straight win, with little-used guard Chris Goulding shooting a team-high 22 points as the Boomers opened up a 15-point buffer.

It was also an opportunity to see highly-rated No.5 NBA draft pick Dante Exum in action, and the 19-year-old didn't disappoint - scoring 12 points and handing out six assists in his 31 minutes on court.

But an Angolan charge, led by dynamic young star Yanick Moreira's outstanding 38-point display, started midway through the third quarter and they cut the lead to just two at the final break.

The onslaught continued thereafter as Australia carelessly gave up the ball, committing 18 turnovers, and played lacklustre defence as the clock wound down in the eight-point loss - prompting the tanking calls.

But if tanking was on the agenda, it was something that was supported by Boomers legend Shane Heal, in Spain in a commentary role.

"(It is) un Australian not to give yourself the best chance to medal," he wrote on Twitter.

"No medals given on pool placings. Pathway to final 4 is the key."