The Tall Blacks will face Lithuania in their last-16 match at the basketball World Cup after beating Finland 67-65 in a thrilling final group game in Bilbao to book their place in the knockout phase. 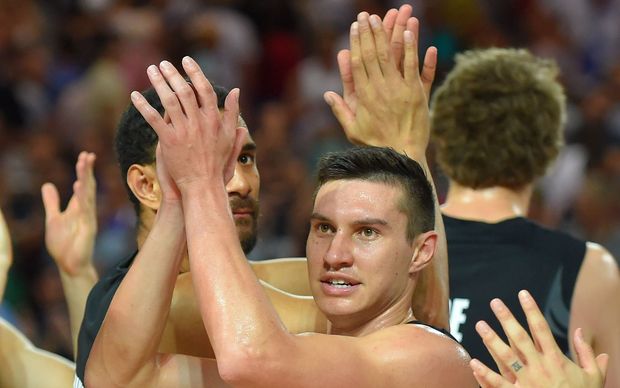 The win, combined with the United States 95-71 victory over Ukraine, was enough for New Zealand to scrape into the second stage of the tournament.

The world number 19th ranked Tall Blacks will face 4th ranked Lithuania in their first knockout game on Monday morning, who they led for three quarters in a warm-up game three weeks ago, before losing 85-79.

Isaac Fotu led all scorers in a coming of age performance for the 20-year-old forward, bagging 18 points and 8 rebounds, while Mika Vukona was a constant force in the face of the Finnish team, scrapping for 12 rebounds, 5 points and 3 assists.

It was a game of swings as first the New Zealanders came out and took charge early, with the Tall Blacks extending that advantge to a game-high lead of 20 points during the third quarter.

The second half however proved a wildly contrasting affair, with the Laplanders dominating without ever retaking the lead in a frenetic final few minutes.

With Mika Vukona in early foul trouble with two soft calls against the Tall Blacks defensive leader, Fotu was called from the bench and answered as only he knows how, crashing the boards and finding his range from inside and with a number of soft hand finishes.

The Finnish defence was shutting down New Zealand's go to outside shooter in Kirk Penney, but the Tall Blacks kept the ball moving and looked to other options, with Everard Bartlett, the Webster brothers and Lindsay Tait all taking responsibility in a balanced first half effort.

The Fins at times proved too much for New Zealand's defence in the low post, with Lee winning most of his physical confrontations, but they were otherwise forced into less than ideal looks at the basket by the Tall Blacks smothering defence.

Rebounding again proved to be a good barometer of the game's fortunes, with New Zealand dominating the first half boards to the tune of 17-9, in the process scoring 12 second chance points to frustrate their opponents and keep the large Finnish crowd quiet.

The final few minutes had more than its share of big moments, from Kirk Penney's clutch three to missed lay-ups, a huge charge call against Finland (Vukona putting his body on the line), and an un-sportsman-like foul called on Jarrod Kenny that handed the Fins the chance to take the lead.

They couldn't however breach that mental and scoreboard barrier, despite having the last possession of the game and a contested look to take the game into overtime, the ball came up short and the Tall Blacks came up big when it counted most.