The New Zealand basketball team have blown an opportunity to make a big statement early at the World Cup, falling 76-73 to Turkey in their Group C opener in Blibao. 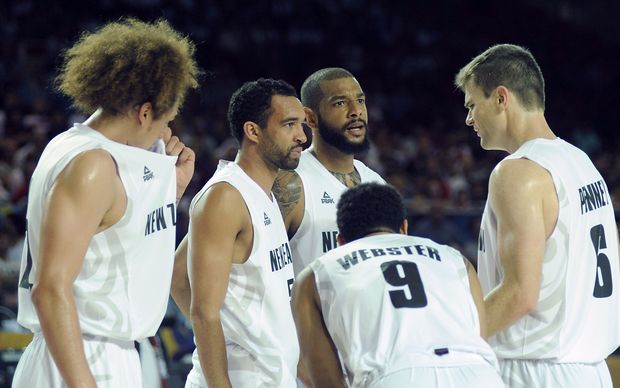 Kirk Penney (R) talks to his team-mates at the World Cup in Spain. Photo: AFP

The Tall Blacks led 38-28 at half-time and had a 12 point lead going into the final five minutes of the game, but were chased down by the seventh ranked Turks.

Up by six, Vucinic was whistled for a technical foul at 3:42. Turkey made both free-throws and scored on the ensuing possession to close the gap to two, then Tai Webster had his pocket picked on the next Tall Blacks possession and was called for an unsportsmanlike foul.

Turkey made both freebies, then Emir Preldzic drained a three to put the Turks up 75-72.

The Tall Blacks had two looks at three's to take the game into overtime with Corey Webster and Kirk Penney firing long range bombs but neither connected and the Turks were victorious.

Corey Webster paced New Zealand with 22 points, while Rob Loe made a strong contribution starting at centre, with 11 points including three three pointers.

The game started controversially with Turkey refusing to face or acknowledge the haka, retreating to their bench after walking past the New Zealanders who soon followed and continued facing the Turkish bench and huddle.

Their next game is against the Dominican Republic, who were beaten 72-62 by Ukraine, tomorrow morning.