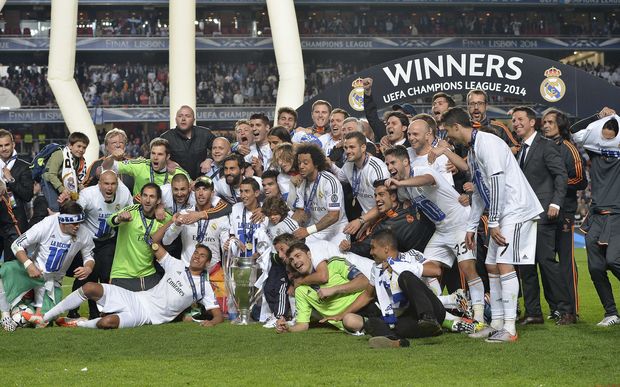 But the most mouth-watering draw has 2013 champions Bayern Munich paired with Manchester City, Roma and CSKA Moscow in Group E.

It's the third time in four years that Bayern and City will have faced each other in the group stages.

For English Premier League winners City, who failed to progress from the group stages in two of the last three years, it continues a run of tough draws at this stage of Europe's premier club competition.

Real and Liverpool will be confident of progressing from Group B where debutants Ludogorets of Bulgaria, who were only formed in 2001 and whose stadium holds just 8,000 fans, and Swiss outfit Basel, who knocked out Manchester United at this stage three years ago, await.

There was a kinder draw, on paper at least, for 2012 champions Chelsea, who poached Germans Schalke 04, Sporting Lisbon of Portugal and Slovenia's Maribor in Group G.

Arsenal, bidding to reach the knock-out stages for the 12th year in a row, plucked Borussia Dortmund, the 2013 finalists, in a tough Group D with Galatasaray, who beat them in the 2000 UEFA Cup final, and Belgian giants Anderlecht.

Last year's runners-up Atletico Madrid, the Spanish champions, pulled Italian champions Juventus out of the hat in Group A, along with Greeks Olympiakos, who regularly struggle at this stage, and Swedes Malmo, the European Cup runners-up from 1979.