The Wallabies coach Ewen McKenzie has thrown the All Blacks' refereeing complaints back in their faces ahead of the second Bledisloe Cup Test at Eden Park.

Hansen said Peyper had apologised to New Zealand for his performance.

But McKenzie says the All Blacks need to look at how they've bent the laws over time to see how they're now paying the price. 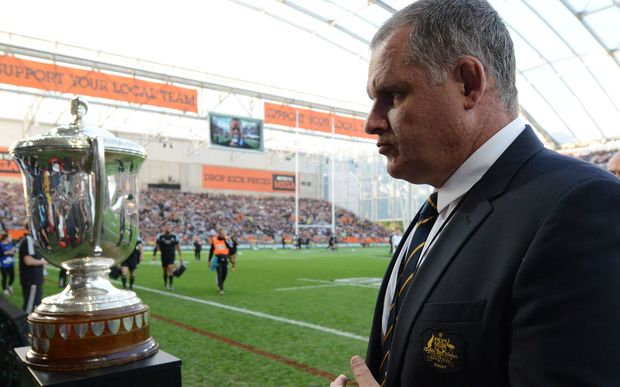 The war of words comes as former Test official Jonathan Kaplan, writing in his own blog this week, said referees were now taking better action at the Kiwis' negative slowing-down tactics under pressure.

Statistics back up Kaplan's comments with New Zealand copping significantly more yellow cards - seven in their past 10 Tests - than in the previous four seasons.

McKenzie says Hansen's gripes about the scrum and Crockett's sin-binning were highly selective, and praised referees for being more consistent in punishing cynical indiscretions.

He says he thinks teams have to look at themselves over time rather than just one game and one mistake, there was three free kicks against the All Blacks' scrum but there were still 14 more penalties against them, so it depends on which bit you want to look at.

Australia must end a 28-year drought at Eden Park to keep the Bledisloe series alive.