South Africa laboured to a 13-6 victory over Argentina in their Rugby Championship opener at rain-soaked Pretoria, with a first minute try from halfback Ruan Pienaar proving decisive. 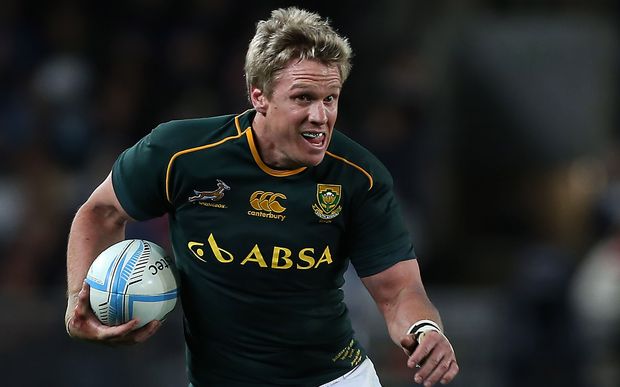 Jean de Villiers of the Springboks running with the ball. Photo: PHOTOSPORT

The Springboks failed to build on Pienaar's try and finished the game defending desperately against the underdogs.

Torrential rain throughout the first half proved a great leveller and South Africa never threatened to achieve the widely expected four-try bonus point.

South Africa led 10-3 at half-time after a nightmare first half for both teams with the rain turning the ball into a proverbial bar of soap.

Pienaar had the Springboks ahead early after a driving maul off a lineout won by the hosts.

The number 9 exchanged passes with Cornal Hendricks down the blindside before darting away to touch down in the corner and first-five Handre Pollard converted from the touchline.

Argentina recovered quickly and were awarded two penalties with centre Marcelo Bosch missing from long-range before first-five Nicolas Sanchez succeeded with a much closer attempt.

The Pumas were creating problems for the Springboks at scrum time, although the South American pack spoilt some good work by conceding penalties.

Pollard restored the seven-point advantage on 17 minutes with a close-range penalty.

A feature of the opening half was the superb handling of high kicks by Springboks full-back Willie le Roux.

Sanchez narrowed the gap to four points with his second penalty three minutes into the second half as the rain eased.

Veteran Morne Steyn replaced Pollard soon after and quickly had his name on the scoresheet via a close-range penalty.

It proved the final score of a Test which finished with the Pumas pressing only for Bosch to knock on close to the 22-metre line.