The world golf number one Rory McIlroy has ended a pulsating third round of low scoring and frequent lead changes to preserve his one-shot advantage at the PGA Championship. 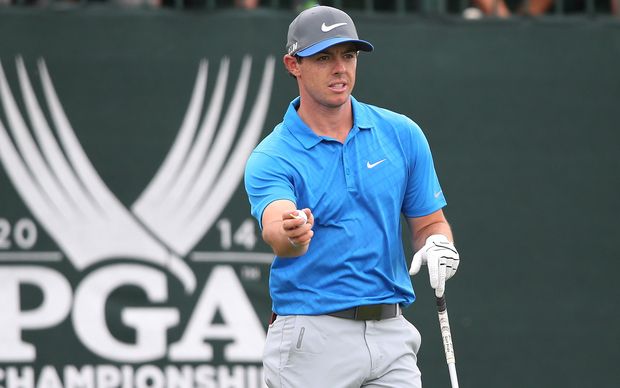 Rory McIlroy prepares to tee off during the third round of the PGA Championship at Valhalla Golf Club in Louisville, Kentucky. Photo: PHOTOSPORT

The Northern Irishman took a one stroke advantage into what is traditionally known as 'moving day', but the British Open champion had to birdy three of the last four holes on a receptive, rain-sodden Valhalla Golf Club to maintain the lead with a four-under-par 67.

In pursuit of a third consecutive victory on the PGA Tour and a fourth major title, McIlroy fended off a series of challenges to keep his position at the top of a tightly congested leaderboard as he posted a 13-under total of 200 in the year's fourth and final major.

A shot back, Austrian Bernd Wiesberger, one of six players who held at least a share of the lead in a wildly fluctuating third round, was alone in second place after matching the day's best score with a 65.

The American Rickie Fowler, a top-five finisher at each of the year's previous three majors, was at 11 under after firing a 67 with Phil Mickelson (67) Jason Day (69) a further stroke adrift.