The Englishman Anthony Hudson has been named as the new All Whites coach and his contract will take him through until the end of the 2018 World Cup campaign. 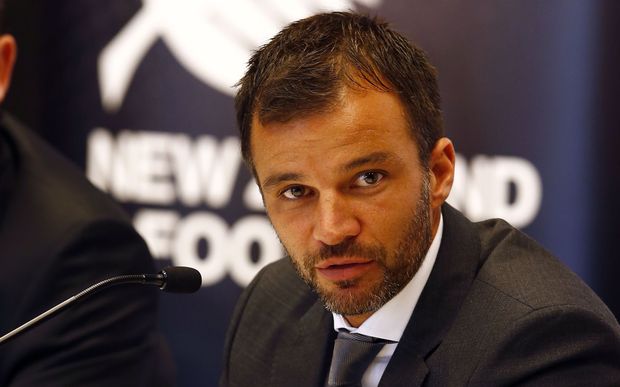 The 33-year-old has until now been looking after the Bahrain national side.

New Zealand Football CEO Andy Martin says Hudson shone out from over 100 applicants for the role, though he admits they shoulder-tapped him to apply after receiving glowing reports from third parties.

Martin says they have a clear vision for the All Whites moving towards the 2018 World Cup in Russia and they believe Hudson is the candidate best suited to the task of bringing that vision to life.

Hudson, the 16th coach of the New Zealand national men's side, says the All Whites role is an attractive one and he intends to build a programme for New Zealand's top players which gives them the chance to show the world what they can do.

After resigning from his position with Bahrain last week, Hudson has relocated to New Zealand for the full-time role, which also includes responsibility for overseeing the programme of all the country's age-group representative men's sides.

Hudson says he has ambitions for the team to not only reach the next World Cup, but to become a big force in international football.

And he says he'll build on what the All Whites have achieved, and the structures already in place.

The first test for Hudson and the All Whites team will come in September's away clash with Uzbekistan.

The squad for the match in Tashkent will be named later this week with 2014 interim All Whites coach Neil Emblen selecting the side and making the trip as the assistant coach of the team.

Hudson, born in the United States when his former England midfielder father Alan was playing for the Seattle Sounders, was described as a "young Jose Mourinho" by Harry Redknapp after working under the now Queens Park Rangers boss at Tottenham.

He's had a stellar rise in the game, at 31 becoming the youngest-ever coach to earn the elite UEFA 'A' licence.

He got his first head coaching job at senior level in 2011 with Welsh non-league club Newport County, where he lasted just five months before being sacked.

He moved to Bahrain to work with the under-23 side under fellow-Englishman Peter Taylor in 2012 and led the team to the title at the 2013 Gulf Cup of Nations.