The Warriors have trounced the Raiders 54-18 in their National Rugby League clash in Canberra. 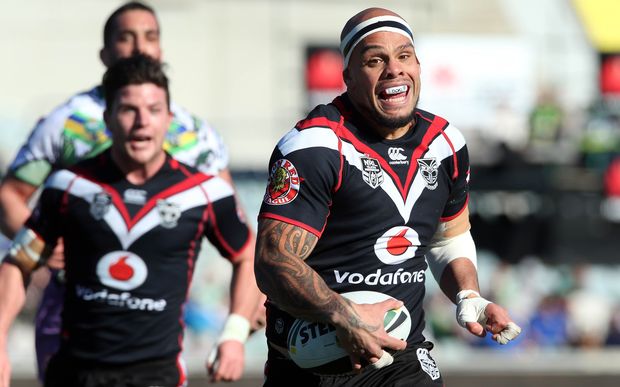 Sam Rapira on the break towards the first of his two tries. Photo: PHOTOSPORT

The wing Manu Vatuvei scored a hat-trick and the prop Sam Rapira a brace as the Warriors ran in 10 tries to three.

Sioni Lousi, Sam Tomkins, Konrad Hurrell, Ben Matulino and Rapira all crossed the chalk in the first half as the Warriors took a 28-nil lead into the break.

Rapira, Vatuvei, Ngani Laumape took the visitors out to a 54-nil lead with ten minutes to play when the Raiders suddenly sprang into life.

Josh McCrone, Paul Vaugn and Reece Robinson scored three quick tries as the Raiders avoided what was close to their largest ever defeat.

The win has come at a cost however with Hurrell, Tomkins, Jacob Lillyman and Thomas Leuluai coming away from the match with a range of lower body injuries, while Shaun Johnson missed the match through injury.

The Warriors finished the weekend in eighth place on the NRL ladder while the Raiders are 15th.

Meanwhile South Sydney hammered Newcastle 50-10 to move to second on the ladder.