The Italian rider Vincenzo Nibali is poised to win the Tour de France after avoiding any late dramas in the penultimate stage, a 54km time trial from Bergerac, won by Germany's Tony Martin. 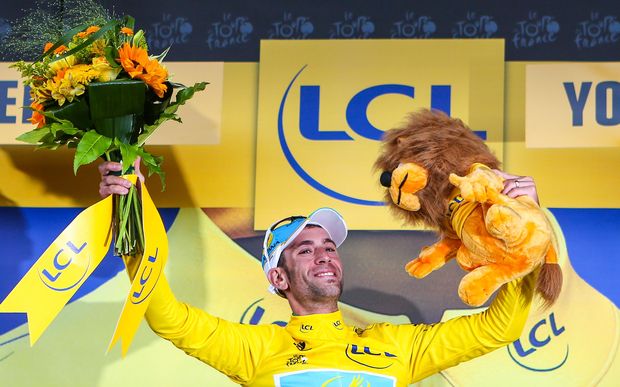 Vincenzo Nibali on the podium after winning stage two of the Tour, 2014. Photo: PHOTOSPORT

Nibali finished fourth on the day, and will roll into Paris on Monday with a seven minute 52 second lead.

France's Jean-Christophe Peraud climbed to second overall ahead of compatriot Thibaut Pinot with the host nation is set to have two riders on the podium for the first time since Laurent Fignon and Bernard Hinault finished first and second in 1984.

Nibali will become the sixth man to win all three grand tours barring a race-ending crash in Monday's processional final stage which ends on the Champs Elysees.

Pinot, who will also claim the white jersey for the best Under-25 rider ahead of compatriot Romain Bardet, is 8:24 off the pace.

Spain's Alejandro Valverde, fourth in the standings, lacked the freshness required in a final grand tour time trial and was never a threat.

Alessandro De Marchi of Italy was voted the most aggressive rider of the race by a panel of journalists and race officials.