The Warriors' late-season charge towards the National Rugby League league finals continues to gain velocity as they posted an emphatic 48-0 evisceration of the Eels at Mt Smart Stadium in Auckland. 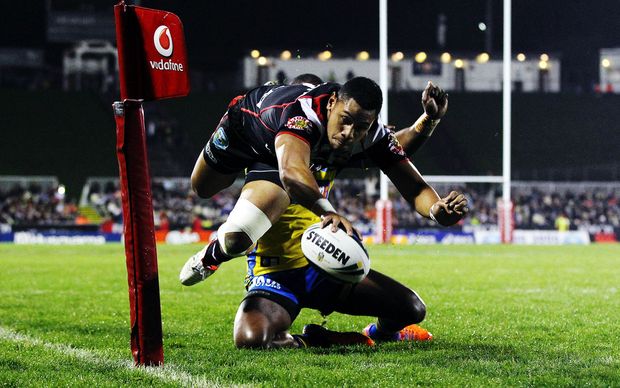 David Fusitua of the Warriors scores a try against the Eels at Mt Smart Stadium. Photo: PHOTOSPORT

In recording their biggest victory in eight years the Warriors climbed to sixth in the heavily congested top eight, just two points outside the top three.

The victory is also a healthy confidence boost ahead of tough clashes against the Broncos and Sea Eagles over the next two weeks.

Fluid in attack and relentless in defence, it is the latter which will be most pleasing for the New Zealanders, given they had conceded an average of 21 points per match prior to round 18.

The game also saw 2014 star recruit Sam Tomkins play his best game in a Warriors jersey, running for over 100 metres, breaking the line on three occasions and adding an assist to his personal brace of tries.

At Mount Smart Stadium for a third consecutive game, the Warriors produced an opening 40 minutes straight out of coach Andrew McFadden's dreams, scoring 36 unanswered points and completing at 91 percent as they ran the Eels ragged.

The Bulldogs climbed to second on the ladder after pipping the Storm 6-4 in a tense encounter in Melbourne.