Flanker Matt Todd's two tries highlighted a superior forward performance by the Crusaders as they hammered the Highlanders 34-8 to clinch second place and a bye into the Super Rugby semi-finals in two weeks. 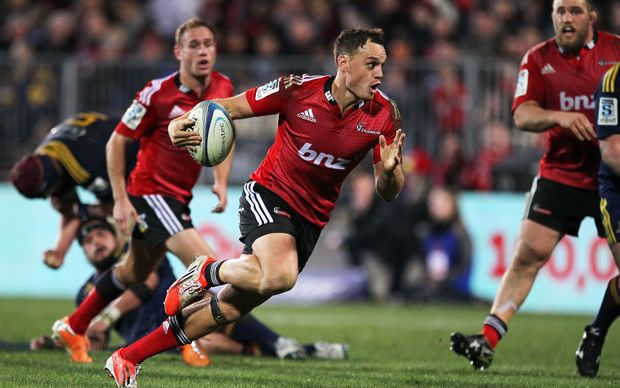 Israel Dagg of the Crusaders runs with the ball in hand against the Highlanders in Christchurch. Photo: PHOTOSPORT

The Crusaders finished on 51 points with the bonus-point victory earning themselves a home semi-final and a week off, alongside the first placed New South Wales Waratahs.

The third-placed Sharks beat the Stormers 34-10 in Cape Town the next morning, but it wasn't enough to overtake Todd Blackadder's men.

The Crusaders dominated the game after the first quarter with their scrum demolishing the Highlanders, whose points came from a Hayden Parker penalty and Richard Buckman try, though they'd already secured their place in the post season.

The Highlanders finish in the sixth and last playoff spot.

Dan Carter slotted four first-half penalties for the home side, who broke open the game when Todd crashed over for tries following attacking lineouts either side of half-time, before Nemani Nadolo and Corey Flynn, from another attacking lineout, crossed to cement the bonus point.

The Crusaders advance straight to the semi-finals while the Highlanders travel to Durban to play the Sharks in the semi-final qualifier on Sunday morning.

The Chiefs will play the ACT Brumbies in Canberra in the other final-four qualifier on Saturday night.