BikeNZ will take a wait-and-see approach to the availability of cyclist Greg Henderson for the Glasgow Commonwealth Games road race.

Henderson underwent surgery after he was caught in a crash near the end of the fourth stage of the Tour de France into Lille today. 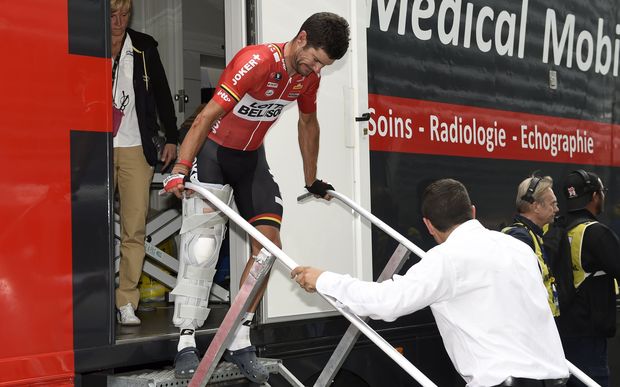 The 37-year-old says he came down after a crash in front of him with about 20 kilometres to go and landed on the knee that has had a lot of work on it previously.

Henderson says it left him with a 12-centimetre split on his knee which left his patella exposed.

BikeNZ has been in touch with Henderson who is hopeful for a speedy recovery that will enable him to compete in Glasgow in three and a half weeks.

BikeNZ High Performance Director Mark Elliott says they'll wait for the result of the surgery and discuss the situation with henderson and their medical team before making any decision on his availability for Glasgow.

BikeNZ has options to bring in a reserve or make application for a further selection from their Commonwealth Games long list.

Three of the original team have withdrawn with James Oram and George Bennett selected by their professional teams for conflicting races and Hayden Roulston with injury, while national criterium champion Mike Northey was added on Tuesday.