The New Zealand driver Mitch Evans has claimed his maiden GP2 victory after a storming drive at the British Grand Prix round at Silverstone. 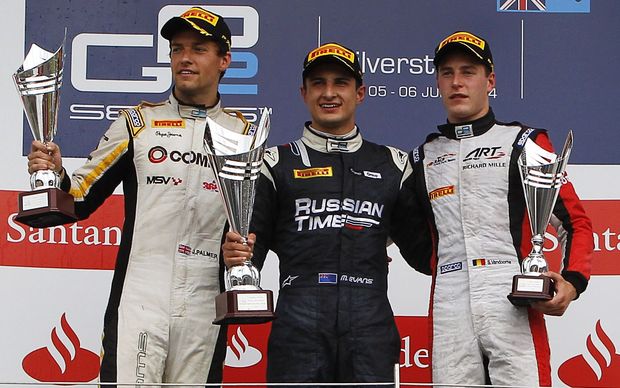 Third-placed McLaren Formula 1 protégé Stefan Vandoorne was 25 seconds behind Evans at the finish.

Evans started third on the 26 car grid and his Russian Time car snatched the lead by undercutting Palmer during the mandatory pit stop to change tyres.

He held off a spirited challenge from Palmer on the fast sweeping Silverstone circuit, before pulling steadily away to win the 29 lap race with a string of fastest lap times.

The bonus points for fastest lap, and the maiden win in GP2; have lifted Evans from eighth to fourth in the overall standings after nine races of the 22-race International championship.

Evans scored only 2pts from the two opening rounds in Malaysia and Spain but has scored points in every race since; at Monaco, Austria and now Britain.

Tonight's shorter GP2 race has a 'reverse top eight grid' which means Evans will line up on the outside of the fourth row for the 21 lap sprint race with no compulsory tyre change.