Angel Di Maria scored two minutes from the end of extra time to give Argentina a 1-0 victory over Switzerland and a place in the football World Cup quarter-finals in Brazil. 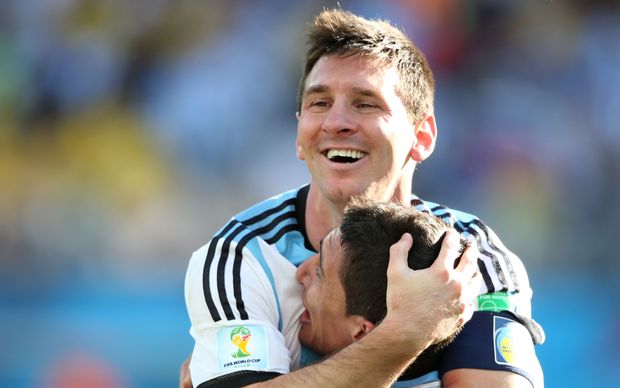 The Swiss more than held their own in the first half of normal time as Granit Xhaka's shot was saved by Sergio Romero and Josip Drmic fluffed an attempted chip when clean through but Argentina gradually took command only for Switzerland's Diego Benaglio to save well from Gonzalo Higuain and Lionel Messi.

Neither team mustered much in the way of an attack in a flat extra period but, just as penalties loomed, the Swiss lost possession allowing Messi to run at their defence before slipping the ball into the path of Di Maria, who swept home.

There was still time for Switzerland's Blerim Dzemaili to head against a post but Argentina survived and will play Belgium who also needed extra time to edge the United States 2-1 in the day's other last-16 clash.

After dominating the game and being frustrated by an inspired Tim Howard in the US goal, Kevin De Bruyne struck in the 93rd minute and substitute Romelu Lukaku in the 105th minute.

Teenager Julian Green got one back for the Americans two minutes later to ensure a tense finish.

The result completed an unprecedented advance of all group winners through the round of 16 into the quarter-finals.

A last-16 round after a group stage was introduced in 1986, following six groups in the first three editions, and eight groups since 1998.

The previous record number of group winners was seven from the 2010 tournament in South Africa.

The Belgium-USA game was also the fifth in the round of 16 in Brazil to head into extra time, tying a record from 1938 when five games in the round were not decided in 90 minutes of regulation as well.