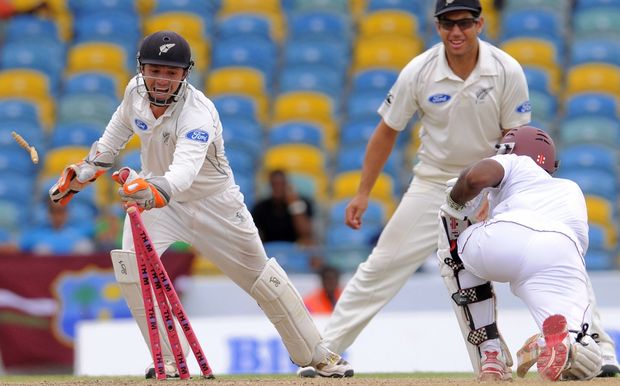 The New Zealand cricketers are celebrating just their second-ever Test series win in the West Indies.

The Black Caps won the third and deciding Test in Barbados by 53 runs to achieve a 2-1 series victory.

New Zealand's only previous series win in the West Indies was when they a two-match series 1-0 in 2002.

The victory with just over 13 overs remaining on the final day completes a third successive series win for Brendon McCullum's side, after wins over the India and the West Indies in New Zealand last summer.

Chasing 308 to win after the Black Caps declared at 331 for seven, the Windies were all out for 254 with Tim Southee, Trent Boult and Mark Craig taking three wickets each.

The Black Caps batsman Kane Williamson, who scored 161 not out in the second innings, was named player of the series.

Captain Brendon McCullum hailed pace bowlers Tim Southee, Trent Boult and Williamson as the key to the side's success in the Carribean.

McCullum also praised the younger members of the side.

The coach Mike Hesson says the series win shows the Black Caps are close to becoming a complete side.