A new study has been launched to look into how farmers can better protect themselves from high winds in extreme weather events.

Rural insurer FMG has commissioned Lincoln University to investigate the impact of devastating wind storms in September 2013 on Canterbury dairy and cropping farms, and how farmers might protect themselves from repeat events.

FMG received more than 260 claims totalling about $7 million from farmers whose irrigation systems suffered serious damage from the winds which, also destroyed large swathes of forest. 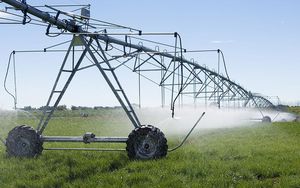 The company says now that it's dealt with 96 percent of the claims, it's looking at how it can help farmers get a better understanding of why the winds had such a devastating impact.

FMG's Products and Services General Manager Mike Lange, said it's about providing practical advice for farmers and some of that has already emerged.

"Some our advice already is around things like being able to point the irrigators into the prevailing wind. And of course we want to know whether there's actually more we can learn about this: what did farmers practically do around these storm events. What did they do and did the irrigators still tip over?. Did they tie the irrigators down?

So if we can find out not only why irrigators tipped over, but in a lot of cases, why the irrigator didn't tip over, then we can actually look to get more of that information out to all farmers."

Mike Lange said there are also lessons to be learned in the way irrigators are set up.

"In particular if we think about linear irrigators that move up and down, versus a pivot irrigator which you can actually point into the prevailing wind. If you're looking to use linear type irrigation systems, actually what is the prevailing wind and how should I orientate the irrigator to be set up in the first place?"

Irrigation New Zealand has estimated that about 800 irrigators were damaged in the storms.