A New Zealand team of vets and industry representatives will go to Nepal later this year to get first hand experience of dealing with foot and mouth disease.

It's part of a new agreement between New Zealand and Australia to work together more closely on measures to combat this livestock disease.

Primary industries minister, Nathan Guy said a team of about 10 New Zealanders will be join an Australian foot and mouth training programme in Nepal, which is one of the countries battling the disease.

"It makes sense for us to be working closely with Australia because they know as a pastoral based economy that it would cause a huge amount of damage to the Australian economy if they ever got FMD and the same here in New Zealand. 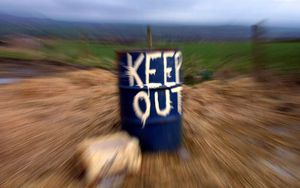 A warning sign in Devon, England, after an outbreak of foot and mouth disease in 2001. Photo: AFP (file)

Mr Guy said the two countries will also be collaborating on other training exercises during the year.

"We're going to be heavily involved with them on a national livestock standstill exercise. Basically what that will mean is getting as much resource in place as quickly as possible to restrict the movement of animals,'' he said.

"In Britain in 2001, when they got FMD it took them four days to put a ban in place to do with stock movement.

''Reports that I've seen have indicated that they slaughtered 35 - 50 percent more animals than what they needed to, if they had moved a lot quicker and actioned that in the first day or two."

Recent research has found a foot and mouth outbreak could cost the Australian economy more than $A50 billion over 10 years.

Mr Guy said the Ministry for Primary Industries is currently reassessing the economic impact of an outbreak here and while he doesn't have an updated figure, the cost would be huge.