The latest sheep meat export figures show a rise in lamb prices has offset the smaller volume of the meat exported so far this season.

Beef + Lamb's export figures for the first half of the 2013/14 season show lamb exports were down by 2.5 percent on the same period last year by volume - but prices were up by 14 percent. 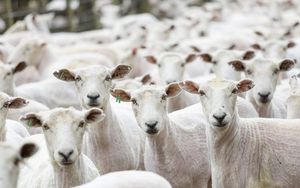 Sheep meat prices are up while volume is slightly down. Photo: PHOTO NZ

The total value of lamb exports in the first half of the season was $1.33 billion - up 11 percent on the same period last year.

The European Union took the lion's share of the exported lamb - 42 percent, North Asia was the second biggest market for lamb taking 33 percent.

Exports of mutton reached a new record in the first half of the season with more than 60,000 tonnes being shipped earning $33 million - up 44 percent on the same time last season.

Beef + Lamb says there has been a tremendous rise in demand for sheep carcasses in China.