Growers in Canterbury are being encouraged to get in touch with their fellow cropping farmers to see if they need help with harvesting as the industry tries to limit crop losses.

It's rained nearly every day for a month in Canterbury making it too wet for harvesting to take place and some crops are starting to sprout and spoil.

Many growers haven't been able to harvest their highly valuable crops, such as carrot-seed and raddish-seed. 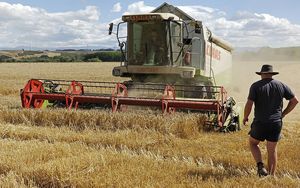 Growers are hoping for a window of fine weather to bring their crops in. Photo: PHOTO NZ

Federated Farmers mid-Canterbury president Chris Allen says they want farmers with harvesting equipment to make themselves available to help others if they can.

"A lot of cropping farmers are individuals they're on their own farm, they've got their own gear they do a lot of things by themselves.

"Some of them might be reluctant to ring a neighbour or a friend and say 'here can you come on over and give us a hand'.

"We're just asking some of those who have finished (harvesting) to make yourself available."

Mr Allen says growers just need a window of fine weather to allow the ground to dry out enough for harvesting to take place.

But he says they've been waiting for weeks for such a window to open.

He has a paddock in which half the seed potatoes were harvested three weeks ago, and the harvesters had planned to come back to do the other half.

"I don't think they would have harvested any spuds anywhere in that past three weeks,"