Feeding nearly a fifth of the world's population is no easy feat - and the Chinese government says farming methods will have to be overhauled if it's going to feed its 1.3 billion people in the future.

A visiting senior Chinese government official and agricultural expert, Chen Xiwen, told a meeting at the Beehive on Tuesday that while agricultural productivity has been increasing, Chinese farming is facing hurdles in producing its own food. 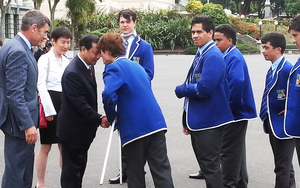 The problems include a lack of irrigable land, access to fresh water, and a toxic legacy from farming in some areas.

Mr Chen, through an interpreter, said China's farmers had been using twice the amount of fertiliser and chemicals used internationally causing significant ecological and environmental damage.