A Bay of Plenty man who was attacked by a cow was in considerable pain but in good spirits as he was flown to hospital, a rescue helicopter pilot says.

The 52-year-old received serious abdominal injuries when the cow rammed him against a tree in Paengaroa yesterday evening. He is now in a stable condition in Tauranga Hospital.

Rescue helicopter pilot Todd Dunham said the man's partner saw the attack and described to him what had happened.

"There was a young calf, not long been born, and it got into a bit of difficulty on a steep hillside in amongst these trees.

"The guy went to help out the calf and the mother obviously took exception and attacked the man, by the sounds of it rammed him against the tree a few times and then stomped on him."

Mr Dunham said the Fire Service did an amazing job getting the man down the hill to the helicopter in the dark. 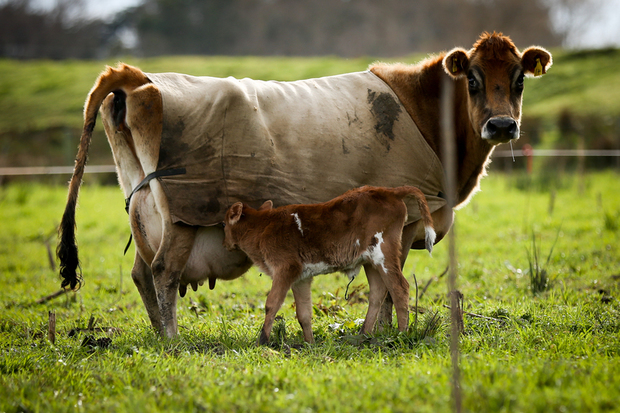 The man was helping a calf when its mother attacked (file photo). Photo: RNZ / Alexander Robertson