Robert Timothy Rapana, who stabbed two cousins, one of them fatally, after a row over music at a party was sentenced to life in prison today with a minimum non-parole period of 10-and-a-half years. 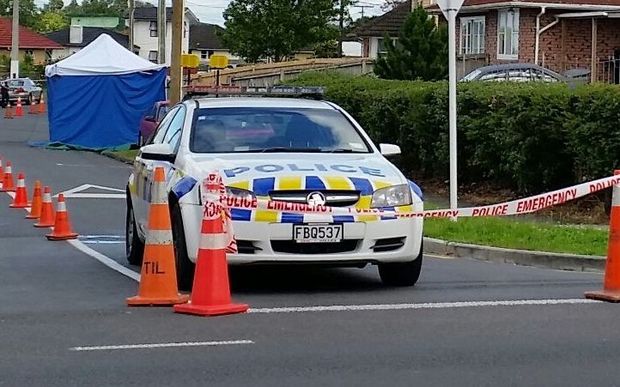 The scene of the incident on Fisher Cresent in Otara last year. Photo: RNZ / Kiri Ennis

The fight happened at a family 21st party, where everyone was drinking, the court was told.

Rapana's partner, Mary Tongi'a'ono, was standing by the stereo and according to the agreed summary of facts, she kept changing the music.

This annoyed the party-goers, including Rio Davis and his cousin Chevy.

Chevy Davis walked up to Ms Tongi'a'ono and the pair started arguing.

Rapana stood up to intervene but Rio Davis grabbed him from behind and put him in a headlock.

Chevy Davis' argument with Ms Tongi'a'ono ramped up and he punched her in the face several times before being restrained by other party-goers and taken to the front of the property.

Rapana then pulled out a knife.

His lawyer Karl Trotter said Rapana brought the knife to the party as a present but veteran Crown prosecutor Aaron Perkins said there was no evidence of that.

Rapana stabbed Rio Davis in the back.

When word got around there had been a stabbing, Chevy Davis was let go.

He came across Rapana and Ms Tongi'a'ono trying to make their escape down the side of the house.

Rapana stabbed Chevy Davis too. One of the wounds punctured his heart.

Everyone convicted of murder should serve a sentence of life in prison unless it was manifestly unjust, the law says.

Rapana's lawyer argued this was just such a case. Rapana was provoked after seeing his partner punched in the face and he also acted in defence, MrTrotter said.

Mr Perkins said this case doesn't even come close to making the threshold and he could only find seven cases where a person convicted of murder had not been handed a life sentence.

Rapana acted in anger and that could be seen by the seven stab wounds inflicted on Chevy Davis, he said.

Justice Katz agreed Rapana's case did not meet the threshold of being "manifestly unjust".

Rapana's response to seeing his partner being punched was grossly disproportionate and as a result of his brutal actions a man had lost his life, she said.

She also noted Rapana was the only person who had used a weapon and the only people to be seriously injured in the fight were Rapana's victims.