Wellington's Zephyrometer, otherwise known as the wind wand, is returning today to its rightful place in Evans Bay. 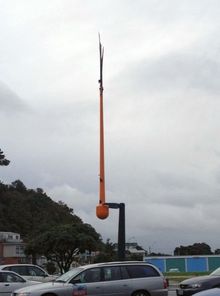 The 33-metre-high sculpture, created by artist Phil Price, was taken to Christchurch for repair after being struck by lightning last August.

Wellington City Council spokesperson Richard MacLean said the wind wand should be back in place by midday today after extensive work.

"It's pretty much all new. I mean, the base of it is original but most of it was obliterated last winter when it got struck by lightning, so it's pretty much a new wind wand."

Mr MacLean said a lightning engineer had advised the council about how the sculpture could be placed to avoid a second lightning strike.