A body, believed to be that of a missing Malaysian tourist, has been recovered in Tolaga Bay, north of Gisborne. 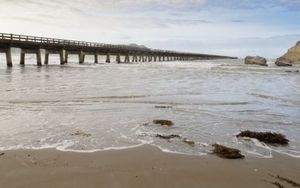 Kuan Loon Loh, 30, disappeared last week, soon after diving from the wharf in the bay.

The body was recovered just after 4pm today, on the seabed 200 metres off the Tolaga Bay wharf.

Using sonar, the Navy located a hotspot for police divers to investigate.

The body has been taken to the Gisborne Hospital mortuary for formal identification.