Two Tauranga men say they would not have survived a three-hour swim to shore without their lifejackets and their floating chilly bin. 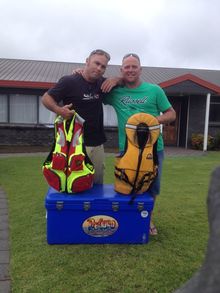 From left, Jason Yorke and Lyndon Enright clung to a chilly bin to support them as they swam to safety after their dinghy sank in the Bay of Plenty. Photo: SUPPLED

They said at about 8.30pm, their three-metre dinghy went down the crest of a wave, broached and sank, and they found themselves swimming.

It took the pair more than three hours to swim to shore, clinging to a chilly bin.

They said it has not put them off fishing, but they never wanted to be in that situation again.

"Never, never. It's one of those things, but luckily we had our lifejackets, and fortunately we had a chilly bin full of fish."

Police praised them for wearing life jackets, which they said helped avoid a tragedy.

Neither man needed medical treatment and police said they were both looking forward to a hot shower.