Police are still hunting for the killer of a man in the Lower Hutt suburb of Taita on Thursday night.

Adam Watkins, 39, is believed to have been shot dead at the High Street property shortly before 8pm. 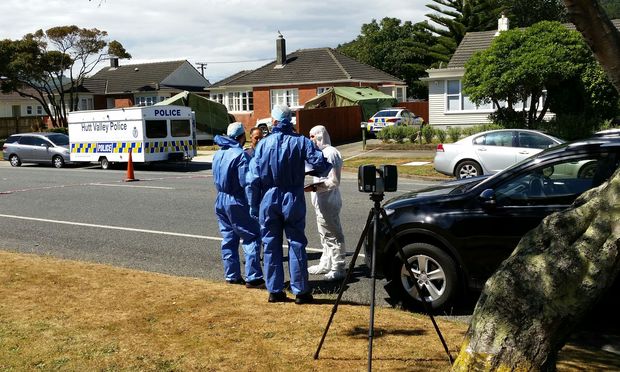 Police and forensic investigators at the scene in Taita on Friday. Photo: RNZ / Ruth Hill

A 29-year-old Lower Hutt man has been arrested and charged with being an accessory after the fact to murder and will appear in court tomorrow.

In a written statement, detective senior sergeant Warwick McKee from the Wellington District CIB confirmed that police had found a gun at a separate address.

"Detectives continue to speak to a number of witnesses and are gathering good evidence and information from the public.

"It is pleasing to make an arrest at this early stage, however there are still a number of persons that we need to speak to and to establish who is responsible for the death of Mr Watkins."

A post mortem will be carried out within the next few days.

Armed police officers were still patrolling the cordon this afternoon, which included the Housing New Zealand property where Mr Watkins died, two neighbouring houses and the street in front.

Road cones at either end of the block stopped the usual traffic and the street was eerily quiet as neighbours and passersby sat on walls to watch the blue-suited forensic investigators going about their business.

Two forensic tents were set up on the property, one of which covered a white vehicle parked on the front lawn and the other over the driveway, where Mr Watkins is believed to have died.

A neighbour, who declined to be named, said she heard yelling at about 8pm and came outside to see what was going on.

"I could see the guy next door filming the body on his phone, and then my neighbour phoned the police.

"It seemed to take ages for them to arrive - maybe half an hour - and then it was all on, police with guns and dogs running about and calling on the guy to come out of the house. But I think he was long gone by then."

Another neighbour said she had been unaware of the drama unfolding in her street until the person who was coming to pick her up phoned to say the street was blocked off.

"I came out to find police cars everywhere and they were telling us all to move back for our own safety."

She said the couple who lived in the house moved in just before Christmas.

"They were friendly and quiet. I used to see him walking his dog. I never saw any kids but one of the bedrooms had kids' stuff in it."

At the Lower Hutt police station this afternoon, no one was available for an interview.

A police officer confirmed that one man was in custody and was giving DNA samples.