Police say they have no firm leads as they try and track down a man who broke into a woman's house in Auckland last month, leaving her with life-threatening injuries. 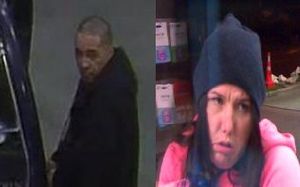 Police have released images of a woman and a man who they say tried to use the beaten woman's stolen credit card. Photo: NZ POLICE

The woman was hit in the head with a bottle and beaten around her head and face in her Eden Terrace home on 2 December.

Police have now released a picture of a woman and a man who later arrived at a service station in the suburb of Royal Oak.

They tried to use the beaten woman's stolen credit card and were driving a stolen Isuzu Bighorn, which was later found abandoned.

Police said they needed help from the public to identify the pair.